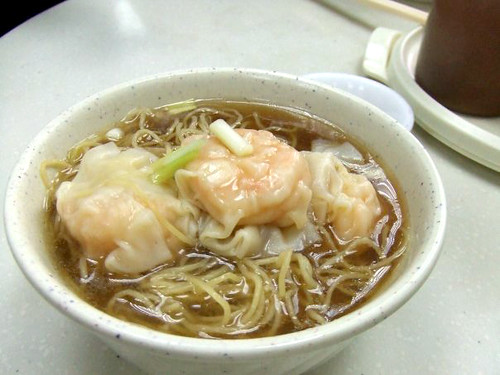 Wanton mee or noodles, is a Cantonese noodle dish which is popular in Guangzhou, Hong Kong, Singapore, Thailand, and Malaysia. The dish is usually served in a hot broth, garnished with leafy vegetables, and wanton dumplings. The Hongkong version, it seems, is the most authentic. The noodles can either be served separate from the soup and wanton (“dry”), or they can be served in the soup. 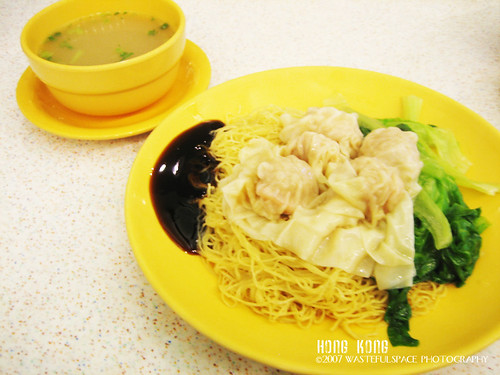 There are often vegetables in the dish. Quality wantons are often determined by the thinness and smoothness of the skin and the freshness of the prawns (and sometimes a little pork) wrapped within. I don’t like the local version because there is often very little prawn and too much pork. They even add slices of char siew to the noodles. That doesn’t do it for me. 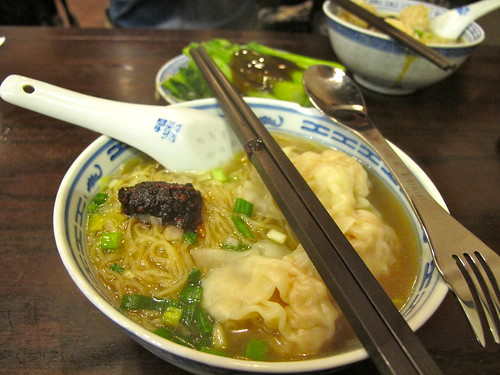 I prefer the Hongkong version of wanton mee. You can buy the frozen version at most supermarkets. Just add water and microwave. I would add some boil chye sim as well, but definitely no pork. Anyway, the local version (at least in Singapore) is well on its way out. My friend Alex, who works as a tour guide, once brought a group of Vietnamese tourists to a food court at ION Orchard and urged them to try out Singapore’s wanton mee. They bought a plate for Alex. When he tried it, he became flushed with embarrassment. It looked like wanton mee, it was called wanton mee, but it tasted like nothing even close to real wanton mee.

That’s the sorry situation here in Singapore. Too many foreign hawkers who have no idea what our signature dishes should taste like. If we don’t start leaning how to cook these dishes ourselves, they will soon disappear from our cultural history. 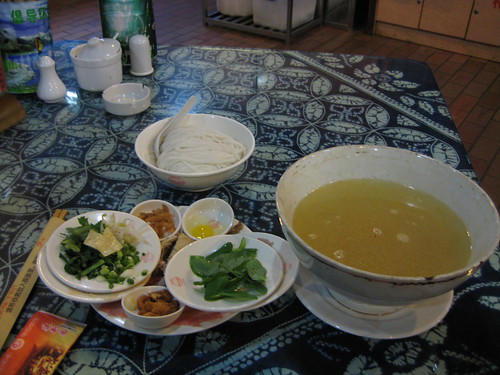 Legend had it that during the Qing Dynasty in Yunnan, China, a scholar isolated himself on a little islet in the middle of a lake in order to concentrate on his studies. His wife decided to make some tasty noodles for him. The dish had to be hot and the ingredients had to be cooked just right. So she prepared some piping hot soup and insulated it with a thick layer of oil. The noodles, thin slices of meat and vegetables, would be kept separate while she travelled to where her husband was sudying. From the shore of the lake, she had to cross a wooden bridge to get to the islet.

When she arrived, she would dunk the ingredients in the hot soup. With just the right amount of heat, the noodles and meat were never overcooked and tasted very good. After the scholar had passed his imperial examinations, he attributed his success to his wife’s Cross the Bridge Noodles. From then on, this became Yunnan’s signature dish.

Why did Mr Chua Lam say that the technique is primitive? That’s because nowadays, the restaurants serving this dish have far more sophisticated means to cook the noodles and other ingredients just right. Ironically, many of the soups served in Cross the Bridge Noodles today are probably not hot enough. The healthy amount of oil used is also insufficient to insulate the soup.

When I tried Cross the Bridge Noodles in Kunming, I remember dumping a whole plate full of rice noodles, fish and vegetable slices into a bowl of soup covered with a layer of chilli oil. There were so many cold ingredients added that I was worried there may not be enough heat in the porcelain bowl to cook everything. Luckily, fish cooks quickly. If I had pork (which I don’t eat) there would have been a good chance that the meat would be undercooked and I would have been stuck in the toilet for so long the next day that I would have missed my imperial examinations.

The problem of insufficient heat may be tackled in several ways. Some use pre-cooked ingredients – which defeat the purpose of crossing the bridge. Some use hot pots – which may make customers feel like that they should have had steamboat buffet instead. 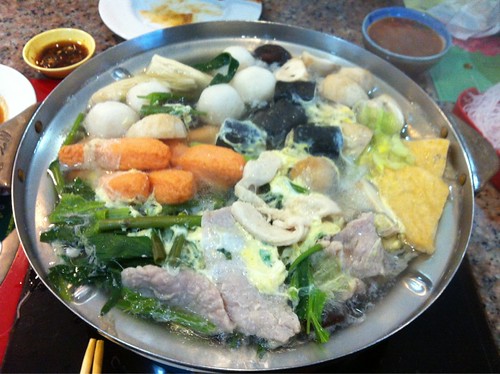 Actually, steamboats provide us with an excellent opportunity for a Cross the Bridge experience without the danger of undercooking. But that’s provided that we don’t do it the typically Singaporean way. They like to dump all the goodies into the pot at one go, place a lid over it and wait for the broth to boil. They might as well cook it over a kitchen stove. The correct way to enjoy steamboat is to cook bit by bit, ensuring that everything comes piping hot from the broth, cooked just right.

Today’s concept of Cross the Bridge Noodles is somewhat impractical. I would ride on a steamboat any day. 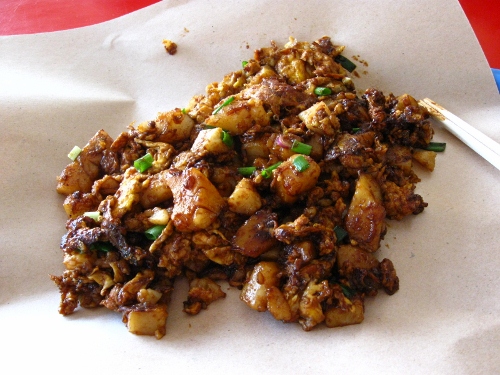 Uncle has been managing this stall for decades. He’s still there after they renovated the hawker centre at Kovan. If I remember correctly, Uncle used to make only the “white” variety of chai tau kuey. Nowadays, he also makes the “black” variety and it seems like business has improved. The morning queue is often long and Uncle is now working doubly hard.