They are all inspired by Chinese dumplings. Jiaozi typically consists of a ground meat and/or vegetable (usually cabbage or chive) filling wrapped into a thinly rolled piece of dough, which is then sealed by pressing the edges together or by crimping. 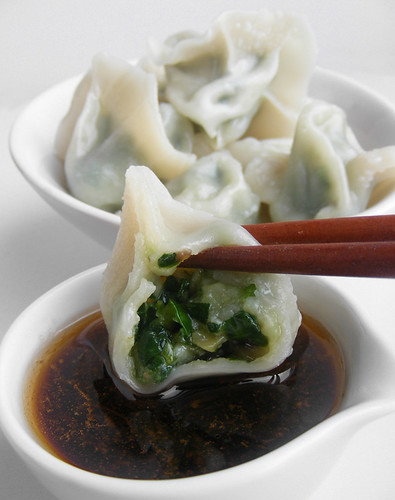 The dumplings can be steamed, boiled or fried. They are then dipped in a mixture of chilli paste, soya sauce and black vinegar before they are eaten. Personally, I would add some ginger shreds as well. The fried version is somewhat more complex. For guotie, the way to cook it is first to fry one side of the dumpling in oil until it is golden brown. Then water is poured into the frying pan and the lid placed to allow steam to cook the rest of the dumpling. Crisp on one side, chewy on the other sides. Marvellous. 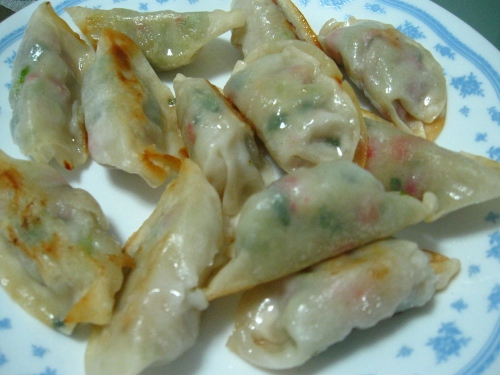 Within China itself, there are numerous variations in shapes, sizes, textures of jiaozi. This makes Japanese gyoza and Chinese jiaozi difficult to differentiate. The Nepalese also have their version of dumplings and this is the famous momo that is popular all over Nepal. 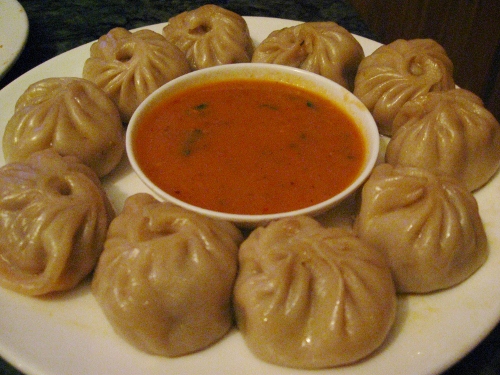 Nepalese momos normally don’t contain any vegetables. Most of them are stuffed with ground “buff” (buffalo meat), mutton or chicken. Shown here is a plate of chicken momo I had in Kathmandu. The dipping sauce is curry-ish. The skins tend to be thick.

Like Chinese dumplings, momos can be steamed or fried. Like tea, Chinese dumplings have taken the region by storm since ancient times. Easily stored, easy to cook, they can be taken as a snack or a meal any time of the day. Ingenious invention.