I finally saw myself on Neighbourhood Chef 邻里厨王 on 8th July 2015. The last time I appeared in TV was in 2010. The programme was BlogTV on Channel News Asia (CNA). Some of my friends and relatives called me up after spotting me on TV, but even though I appeared on two episodes, not that many people who knew me knew about it.

For neighbourhood Chef, it was different. Very different. I didn’t have to ask anyone to watch out for it. In fact, it was a friendNwho saw the trailer and informed me on Facebook that I would appear on 8th July. The show was televised. Almost everyone I knew saw it. It goes to show the kind of viewership that the programme commands. Amazing. For the uninitiated, here’s a brief introduction of Neighbourhood Chef 邻里厨王.

Basically, it’s a cooking show/competition. Participants or contestants have to cook dish based on a certain theme like fish, duck, chicken etc. Their finished product will be judged by a panel of three chefs and 10 members of the public. The prize money for the winner is $3000 in cash and $1000 in kitchen ware voucher. I keen to participate for the opportunity to share my ideas and philosophies on food and cooking with a more diverse group of people. It’s not the money. The prize money, if I had won, would have been donated to the earthquake victims in Nepal. Anyway, I was excited by the idea, so without much hesitation, I agreed to appear on the show.

The footage from the competition proper was entirely shot at Kreta Ayer Square on 16th May 2014. I can’t say that it was an enjoyable experience, but I certainly learned a lot of things which are not apparent just from watching the show. For the benefit of curious audiences, I’ve decided to blog about some of the things that happened behind the scenes – not to disparage anyone or give excuses for not winning, but to give future participants some insight into some of the problems they may face. I’ll also give some tips to improve their chances of winning. 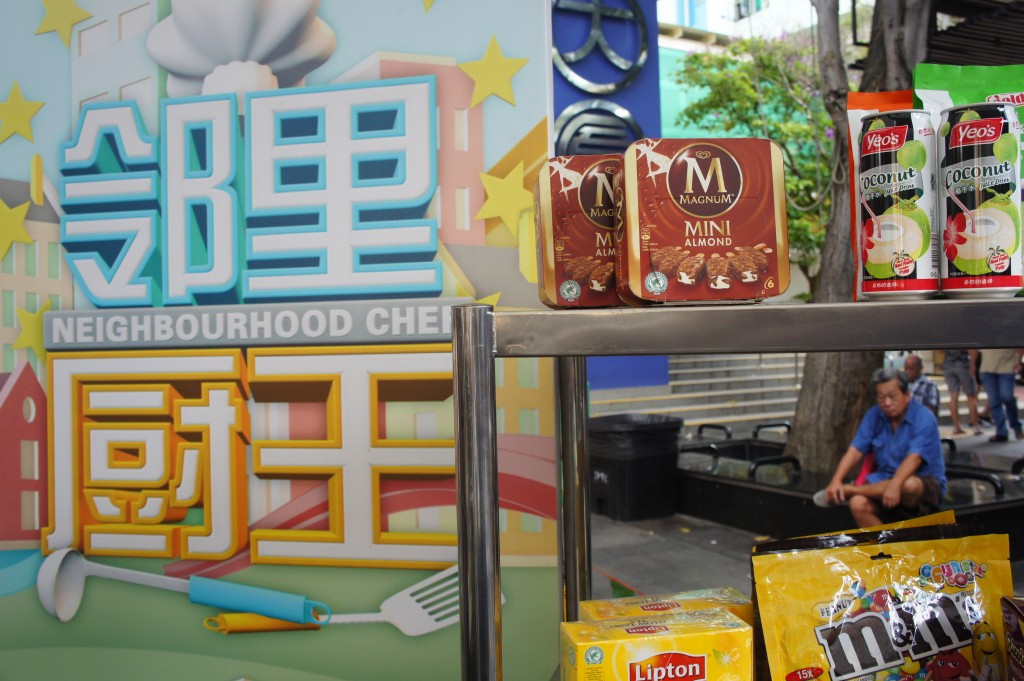 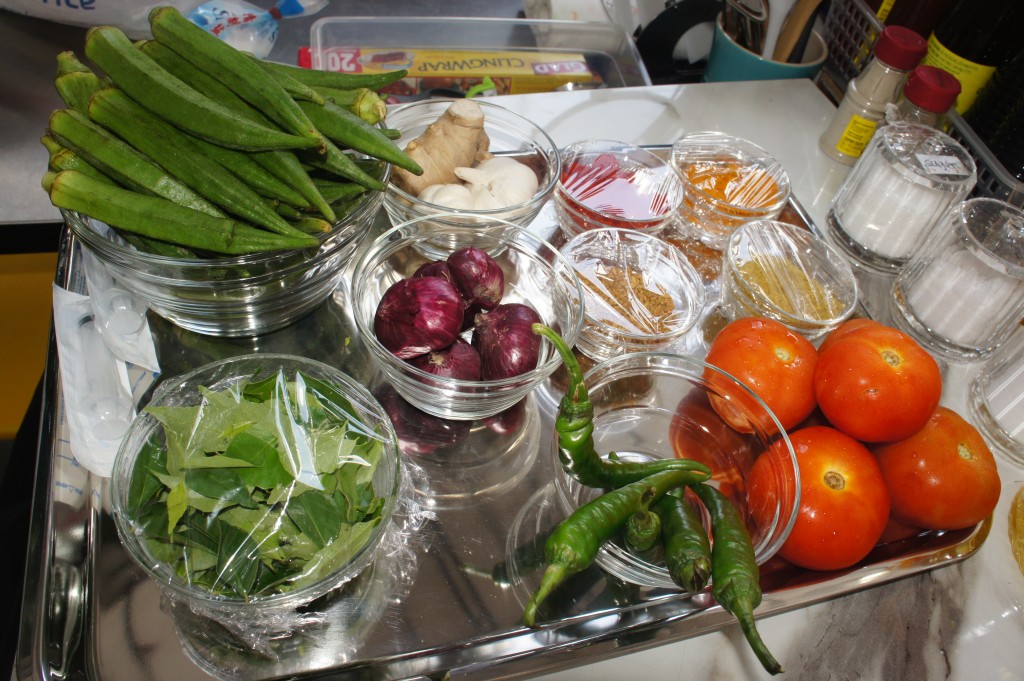 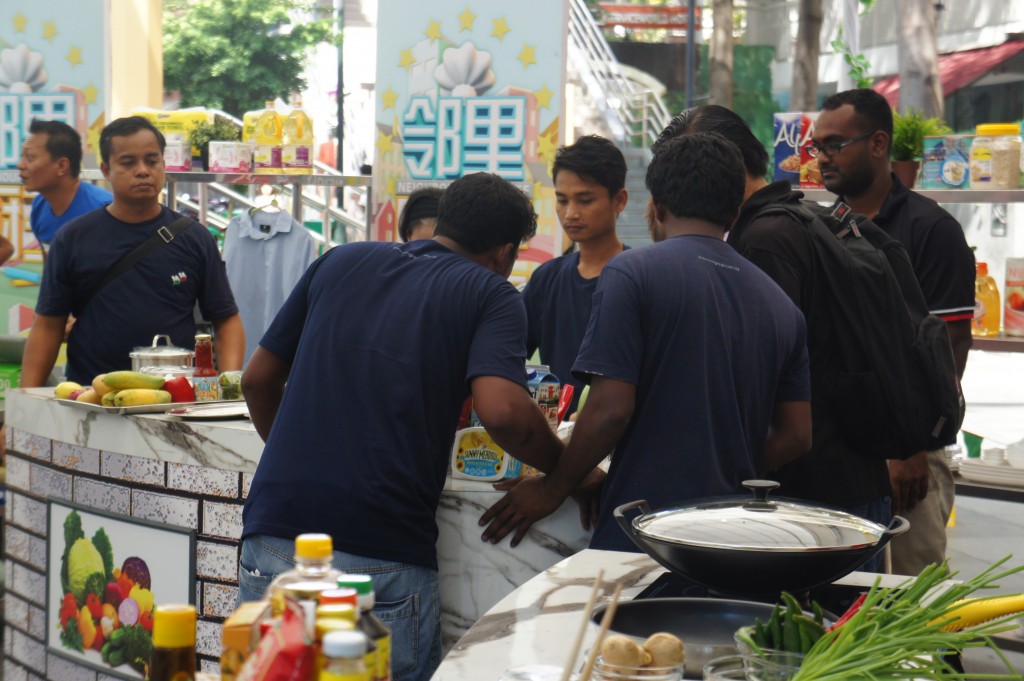 There must be hundreds of people employed for this show

Above are some of the pictures taken at the competition venue. As you may notice, it’s quite an impressive production with no shortage of sponsors. The briefing/preparation for the competition starts at about 10.00am and the shoot ends at almost 8.00pm! It’s crazy. Here is how it goes.

1. After reporting, you would be briefed on some of the dos and don’ts, the use of induction cooker etc.

2. The hosts arrive and get ready. They shoot the introduction. The hosts talk about the main ingredient for the episode and then proceed to interview the contestants one by one.

4. At about 2.00-2.30pm, they blow the virtual whistle and contestants are supposed to start preparing their ingredients.

5. You are supposed to let the crew film every step of your cooking. Therefore, for those whose dishes ought to be ready in half an hour or less, they must start and stop to wait for the camera before proceeding to the next stage.

6. The show drags on to about 5.30pm because some of the contestants actually take 3 hours!

7. They film your finished product and submit your dish to the judges for comment.

8. They then grab 10 people off the streets and get them to taste and vote for your dish.

It was an exhausting experience, but wait a minute. I’m an adventurer, so it’s more a frustrating experience cooking under unrealistic conditions. For instance, I have never cooked for 14 or 15 people. I would also not leave my half-cooked items standing for hours before proceeding to the next stage. I didn’t think it would affect the taste of the dish too much, but then, it does.

So how does one tackle the problems and win? I’ve come up with a strategy for the benefit of future contestants.

1. First and foremost, don’t cook like the way you would at home. Forget about having to serve hungry family members who have just rushed home from school or the office. You are cooking for the camera and the judges. Choose a very complicated dish that actually takes 3 hours to prepare. In that way, you won’t need to stop, leave your stuff standing and wait for the other contestants.

2. Very important. Choose a dish that comes in small individual portions and not a big common pot. Do some quality control at the end and pick only the best individually cooked portions for judging.

3. Prepare lots of extra ingredients so you can repeat (for each individual portion) if the results are not satisfactory.

4. This one is subjective and comes more from gut feeling than anything else (even though I listened carefully to all the judges’ comments), but I think both chef judges and neghbourhood judges are looking for familiar yet unfamiliar tastes and textures. Don’t give them something that is too common or too exotic in terms of taste. Give them something that looks and tastes familiar yet surprising. Read, fusion food.

5. Don’t be afraid of talking back when the host asks you a stupid question or challenges you. It’s not a live programme. Keeping it inside can affect your mood and performance. Unless you’re the winner, you’ll have no chance to talk after hosts leave your “stall” when you’re making the finishing touches to your dish.

The recipe and instructions lifted off any book or website does not take the reader’s kitchen setup and conditions into consideration. So I think the best guide is a rough guide. It’s up to the reader to spontaneously experiment and find his own style; his own taste.